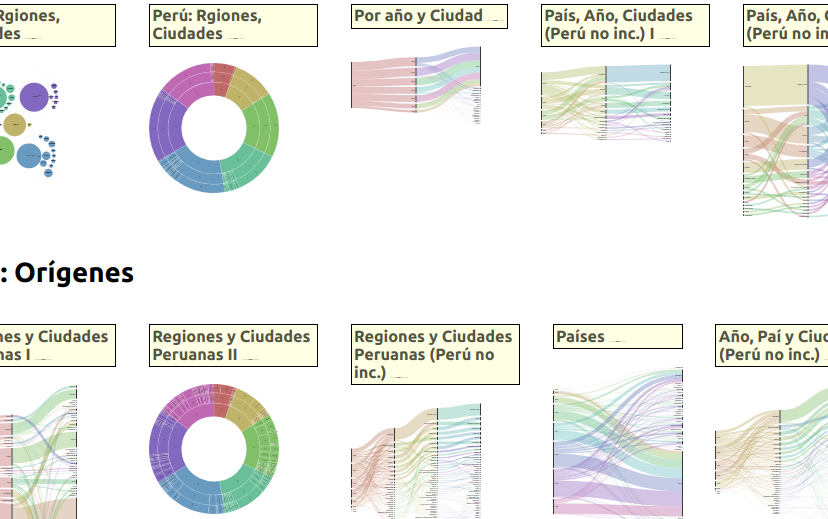 I'm presenting three works on data visualization and exploration for the Mariátegui digital archive (Lima, Perú, 2019). We have been working with two collections of the archive: the Amauta magazine and the mails of José Carlos Mariátegui.
The Amauta collection (32 issues, from 1923 to 1930) is exhibitet at Museum R. Sofia (Madrid).
The Avant-garde Networks of Amauta: Argentina, Mexico, and Peru in the 1920s. From 20 February to 27 May, 2019 / Sabatini Building, 3rd Floor.
Around Amauta magazine I developed two interfaces that allow you to explore and read the contents of the magazine in new ways.
On the conserved mails, you will find a set of twenty-five diagrams that show the communications that José Carlos Mariáhad by mail from 1923 to 1930. The diagrams focus on: people, countries, regions, cities and topics.
Amauta explored Data: List of articles published in Amauta' issues and the metadata related to each one.
Visualization: a tool called Area has been customized for this collection. Area reorders of more than 80 representations of the collection, thus bringint a sort of kaleidoscopic mode.
Crossreading Amauta Data: Transcript of the 1110 articles published in the 32 issues of Amauta magazine. A topic model analysis has been applied to this collection, combined with a human labelling process that I developed in my Aussi thesis at the University of Canberra.
Visualization: A navigation tool is presented to read the articles of the collection in a non-linear way, allowing the readers to experiment a derive across themes.
LaRed (TheNet) Mariátegui Data: the texts of the letters and their related metadata, including: senders and destinations, names and places.
Visualization: Twenty-five diagrams are presented.
Authors and Licenses Proposal and code development: Jaume Nualart Vilaplana Data, extraction, transformation and cleaning: Ana Torres Terrones and Jaume Nualart Vilaplana José Carlos Mariátegui: Ana Torres Terrones. Curator, producer and advisor: José Carlos Mariátegui (grandson) License of the data and the we code: Creative Commons License Attribution 4.0 International Creative Commons License.